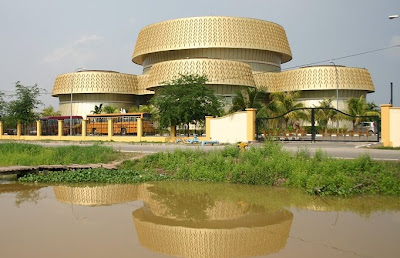 The Kedah Paddy Museum, also known as Muzium Padi or National Riece Museum, is the only museum of its kind in Malaysia. It is located in Kedah, at the foot of Gunung Keriang just north of Alor Setar.
The Rice Museum was built on land belonging to MADA (Malaysian Agricultural Development Authority) at a cost of RM24.7 million. The museum building resembles bushels of harvested paddy stalks.

Throughout the Rice Museum, the rice motif is repeated everywhere, on the banisters, and even on the fence and gate outside.

Paddy Museum that located at Gunung Keriang ,Kedah is first paddy museum that build in special architecture building.Why I say like that?It is because the interior of this building mostly with paddy decoration and in this museum they 3 floor with different exhibition that they put on it from the first paddy plant to way that paddy come to be the rice that we eat now.
The museum explains the rice cultivation process, displays different varieties of rice, showcases equipment and tools used in rice cultivation through the ages and in various countries.
On entering the museum was directed to a spiral staircase which has been decorated to resemble the interior of a cave, possible inspired by the cave in Gunung Keriang which is located a short distance away.
The stairs lead to the top floor of the museum and  emerged onto a revolving platform equipped with forty cinema seats from which visitors can admire a 360 degree diorama and mural which has been painted on the entire inside wall of the upper level.Apparently the mural was painted by a team of 60 North Korean artists.