The Cameron Highlands is one of Malaysia’s most extensive hill stations. To the north, its boundary touches that of Kelantan to the west, it shares part of its border with Perak. Situated at the north western tip of Pahang, the “Camerons” is approximately 85 kilometres from Ipoh or about 200 kilometres from Kuala Lumpur. During the day, the temperature seldom rises above 25 °C (77 °F); at night, the temperature can sometimes drop to as low as −0.9 °C (30.4 °F). The resort has a diverse population of more than 34,000 people. It comprises Malays, Chinese, Indians and other ethnic groups. The literacy rate here is above 88 percent. The gateways to the highlands are via Kuala Lipis or Raub through Pos Betau to Ringlet. From Perak, it can be accessed either from Tapah or Simpang Pulai. While from Kelantan, route available from Gua Musang to Pulai in Gua Musang to Kampung Raja.
INTERESTING PLACES TO VISIT IN CAMERON HIGHLANDS
TIME TUNNEL MUSEUM
Time Tunnel is a local museum dedicated to preserving the historical memory and cultural heritage of Cameron Highlands. Located in Brinchang, the museum occupies a basement within Kok Lim Strawberry Farm, perched next to the main road 2km after town or 3km before Kea Farm. The 1,000 odd exhibits are the private collection of See Kok Shan, a Cameron local with a penchant for vintange items and memorabilia. Having acummulated much junk over years of domestic travel, See partnered with the owner of Kok Lim Strawberry Farm to open Time Tunnel - a way of sharing his treasure trove and memories with visitors from all walks of life.
MARDI AGRO PARK
MARDI Agrotechnology Park is an agricultural research station and show garden for tourists located at Tanah Rata, managed by a government institute for such developments. Within the 42-hectare expanse of the park, visitors can explore various flower gardens, crop houses, plant nurseries, farmlands and even a small tea plantation with factory. There is also a small hotel in the form of an English cottage, providing boutique accommodation with meeting facilities. To get to the park, take the slip road at right behind the bus station at town, then follow it until the signboard to MARDI appears at left. Entry tickets are priced at MYR5 per adult and MYR3 per child.
BUTTERFLY FARM
The Butterfly Farm is the second of two such neighbouring parks in Kea Farm, Brinchang. Like the Butterfly Garden, it has a similar structural arrangement, but with more cement and newer furnishings. The name is really a misnomer, as the park does not 'farm' butterflies; by breeding and cultivating them, rather, they are restocked from wild populations on a regular basis. The Butterfly Farm consists of a garden section, where butterflies roam in a landscape of shrubs and flowers, and a larger zoological wing, where other insects, lizards, snakes and mammals are displayed in enclosures or tanks. Open daily (8pm-5.30pm), tickets are MYR5 per adult and MYR2 per child.
SAM POH TEMPLE
The Sam Poh Temple in Brinchang is the largest temple in Cameron Highlands, nestled on a small hill top at the back of town. The access road can be found at the turn off next to Iris House Resort; follow the signboards along the narrow road up in less than five minutes by car. This opulent temple is Buddhist in nature, but a variety of other brass deities can be found huddled inside, typical of Chinese pluralistic belief. While also a tourist attraction, most visitors are local Chinese or from Singapore, coming to admire the oriental architecture while offering prayers at the altar. The temple is free to enter, as long as you keep a quiet profile and remove your shoes.
PICTURES: 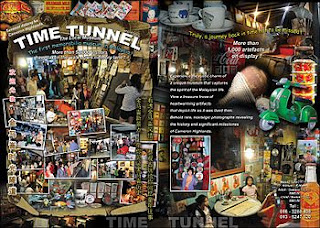 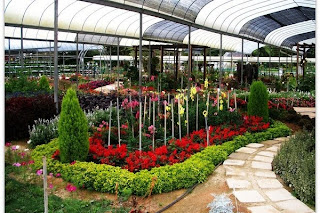 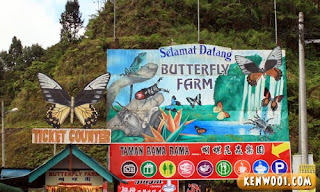 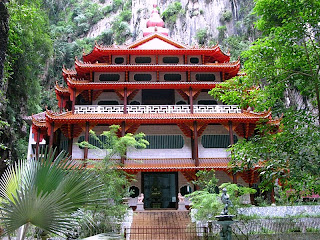