THE LEGENDARY OF ISTANA SERI MENANTI

Assalamulaikum and Hello there world. today i'm gonna share with you little bit about Istana Seri Menanti, Negeri Sembilan. preety cool haaa. haha :D
Istana Seri Menanti. Istana Seri Menanti is one of the legendary palace that have in Negeri Sembilan beside other palace placed in Melaka, Johor and the other state in Malaysia.
Alright, Istana Seri Menanti was built 100% used by wood. it was built on 1902 and compeleted in 1908. quiet long time haaa. okay Istana Seri Menanti also had built at a harmonic area, gorgeous and lovely place.
It has been chosen by the rulers and princes of the old days to make settlement and seat of government in the past.Seri Menanti said to have received its name from the names of three paddy stalks that grow in that area. that paddy was named Padi Menanti or "semangat padi yang menanti". the word "seri" means paddy in the Indonesian language. 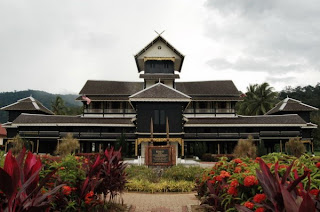 its BEAUTIFUL right~!! inside of its moreeeeee preety cool.!! you should visit this place!
beside that, four-storey palace was originally designed by two carpenter named Kahar and Taib. Kahar carpenter was awarded the title of Dato' Panglima Sultan by His Majesty Sultan Muhammad commander for his services. it was coollllll~
Istana Seri Menanti was built to replace the fired palace restored by soldiers during the chase Yamtuan Antah during the war in the Bukit Putus.
Istrana Seri Menanti design by Minangkabau features as the Yang di-Pertuan Great desire design connected with the Minangkabau. The castle was then the design is not only external but also internal connection with Minangkabau characteristics in terms of family, education, arts and others. 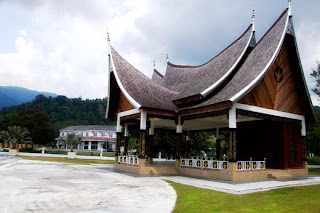 Minangkabau style~
construction of this palace altogether did not use a nail. it was built by using the "pasak". which combines the right timber with other timber. and it is very strong until today.
the sum of all columns of this castle are 99 rods in total and it denotes the number of saplings, saplings commander of Negeri Sembilan 99 people. according to the history of each pole was held by each commander to construction. while the four pillars in the middle symbolizes the four chiefs palace. (The Four Palace). 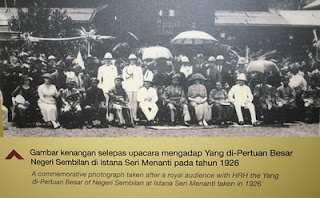 princes and warriors~
This palace was used by the Islamic Council for the State of Religion in High School made ​​in 1959 until 1964. This palace then left empty and has raised awareness of the son of the late DYMM Tuanku Jaafar Abdul Rahman, the palace is the official Royal Museum under administration of Muzium Negeri,Negeri Sembilan.
From that moment Muzium Diraja Istana Lama Seri Menanti had change had changed to display family collections diraja.setiap diisai space without changing the furniture layout to explain the function of the space. the addition of this collection is added from time to time with the cooperation of the palace. 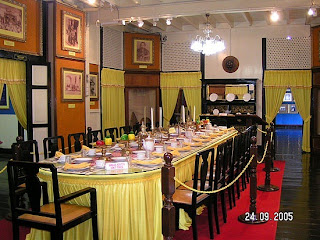 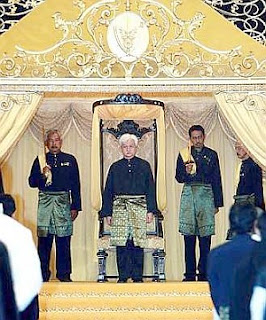 picture of proclamation ceremony in the Istana Seri Menanti.
alrght then. thats all from me about Istanba Seri Menanti. happy reading and visit soon. :)
prepared by :
Zafirah Aqwa Binti Zakaria