Congkak is a Malay traditional games often played as an indoor activity or as a contest. Typically it uses a hollow wooden board or a hole in the ground and typically cavalier use of rubber seeds or marbles.

Congkak is a popular logical game with variations played throughout Asia, Africa and the Americas. Known elsewhere as Mancala, the version commonly played in the Malay Archipelago requires two players to share a wooden board with at least seven holes mark each player villages and warehouses. The seeds are placed in each hole and redistributed according to rules of the game, with the objective to get as many seeds as possible in one warehouse. A traditional game popular in the past, cavalier attraction began to decline by the 1980's as Singapore becomes more urbanized. 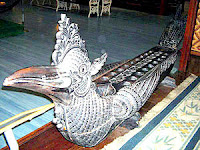 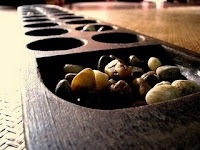 The oldest board game Congkak has been found in Roman ruins fortress Egypt and dates back to the 4th century AD. The game was probably introduced to Southeast Asia by Indian or Arab traders in the 15th century.

It is believed to have spread throughout the Malay world through traders through Malacca, an important trading post at the time. In the early days, it was thought that this game is for the people of the king and family and palace, but then it spread to the general population of the state.  In addition to Malay, Indian Peranakan also enjoy playing Congkak.
In Java, the term "rock tissue" refers to the same rock pitmarked from the bronze age iron Indonesia. These stones have a row of 4 or 5 cup-shaped hole and two holes at each end, the formation of which has many similarities with the game of the same name in Java. These stone prehistoric tissue is not related to the game and may be used in a ritual to propitiate the ancestors. Stones like this can be found around Java.
Malaysian Ringgit during the 10 cents has Congkak board behind the recognition of a long history of cavalier in Malaysia.

How to play :
Typically made ​​from woods such as merbau wood, keruing,  and so on. There are also boards wrapped in cellophane made ​​from wood rambutan, jackfruit and so on, as the artisan makers' ability cavalier.

The game starts with seven game pieces (shells, marbles, pebbles or seeds) in each hole except the "home" is missing. Congkak requires two players. Each player controls the seven holes on the board and have a "home" to the left. The goal is to collect as many pieces at "home" on your own. 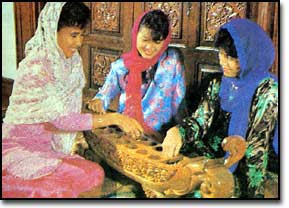