Kuala Perlis is situated about 11 kilometers from Kangar, the capital town of Perlis and is the third largest town in the state. The word Perlis appears to be a version of the word perelus, that is soil that gives way when stepped upon or where a hole is unexpectedly met with. The word Kuala meant estuary. 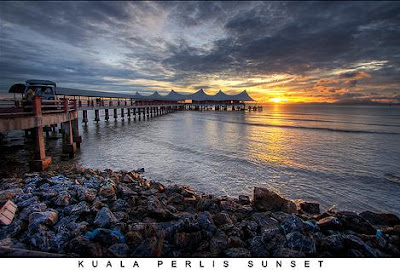 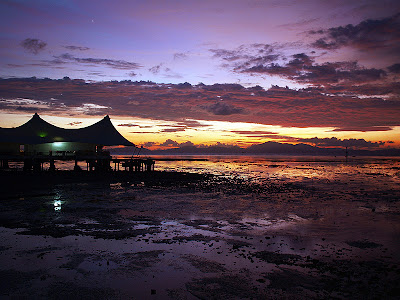 Masjid al-Hussain Kuala Perlis.
Opened on October 8, 2011. The mosque m
ade from a variety of mineral substances without any paint
and built floating on the beach of Kuala Perlis.
Able to accommodate up to 1,000 pilgrims.
One of the specialties of this mosque, it is disabled-friendly.
It is
located near Kuala Perlis jetty at the entrance to the island of Langkawi.
3 minutes of time taken from Kuala Perlis jetty to the mosque on foot. T
housands of tourists visit every year. It was donated by a businessman, Tan Sri Mohd. Ariffin Joseph. The mosque took four years to complete at a cost of about RM12 million. 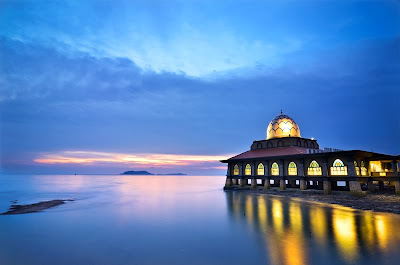 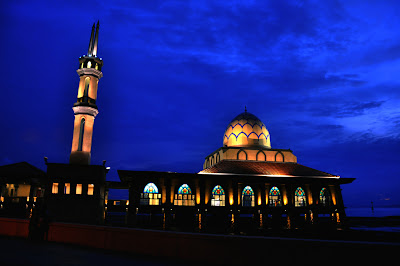 Not painted
The mosque became a new icon of Kuala Perlis was inspired Raja Muda Perlis, Tuanku Syed Sirajuddin Syed Putra Faizuddin Jamalulail and realized by billionaire Ariffin. Ariffin's brother, Datuk Dr. Mohd. Hussain died in 1999 before he could fulfill the wish to build a mosque. Because that upon completion, the mosque is named after his brother. From the plains of the mosque, visitors are sure fascinated see no painted mosque walls instead just using coral rock types, quartz, granite, marble and pebbles.
A waqf mosque erected in the square. Guests can also relax in along the wall overlooking the sea. Three palm trees brought in from Arab Lands West Asia inject elements of the mosque site.
Like many other mosques, the main external features of Al-Hussain is the dome. Its color is golden yellow with blue motif that is synonymous with the official colors of Perlis. 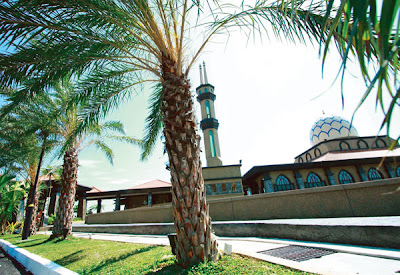 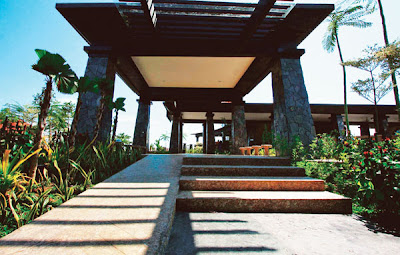 Light tower
The lights indicate the time in prayer. It is for the convenience of fishermen or those who are already at sea.
Blue lights indicate the Fajr and Maghrib and Isha prayers while the green is. The tower can be seen from a distance of 10 kilometers.
Before getting to the space in the mosque, visitors will cross a 50-meter long bridge connecting the land and the building of the mosque.
Moving to the interior of the mosque, feel comfortable from the air conditioning cold fast after touching the skin let alone see the rock walls of the mosque are shown writing the verses of the Holy Quran.
At the top of the inner dome carved circular word of God while the bottom five cornered star pattern symbolizing the five Islamic Rukan written in five languages: Malay, English, Arabic, Chinese and Tamil.
Done pray and witness its beauty, do not forget to bring back a souvenir memento of a special hour Citizen brand priced between RM180 and RM350 and RM12 keychain. 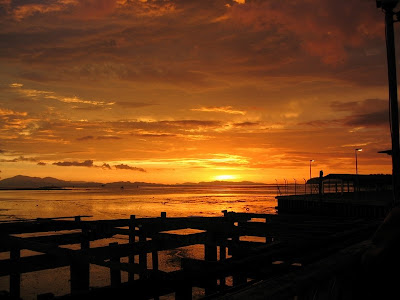 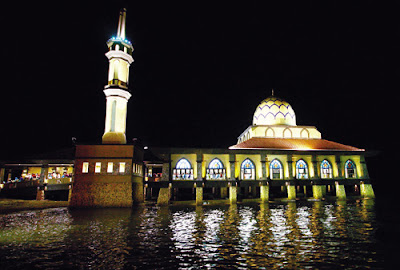 That is as far from me. Good from God, and the bad just
from my ownself. All humans make mistakes, just as I do. Hope you are forgiven all wrong and my mistake. Hopefully this citatio
n
able to move the piece of your heart to visit the Masjid Terapu
ng
Kuala Perlis. Assalamualaikum w.b.t ..
- FARRIS -
Wan Mohd Farris bin Wan Nasir
2011624452